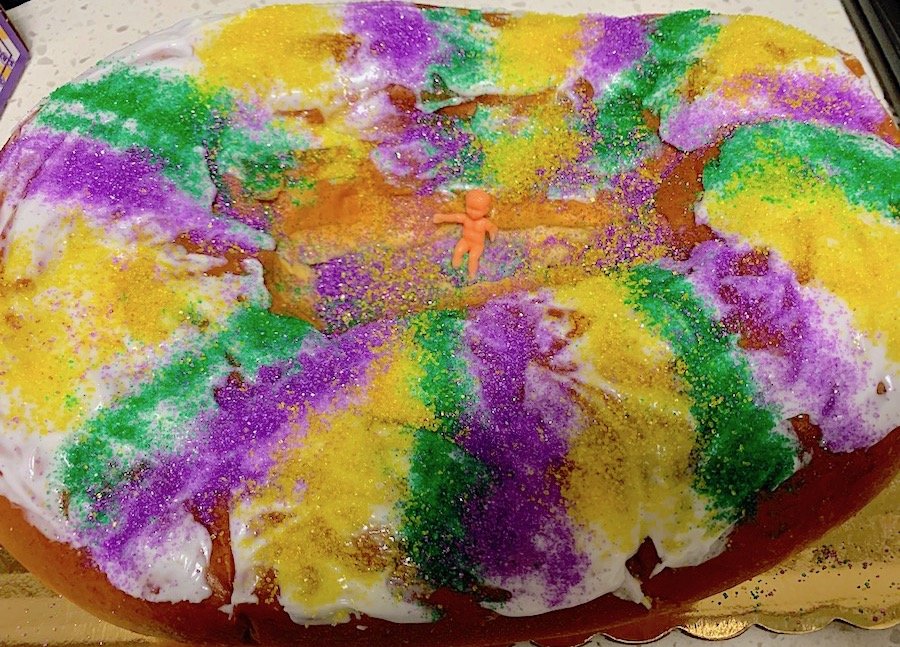 Mardi Gras is French for “Fat Tuesday”, referring to the last night of eating rich, sweet, and fat-filled foods before the ritual of Lent. So let them eat King Cake, one of the traditional foods eaten during New Orleans Mardi Gras Season, but not after Fat Tuesday!

When is Mardi Gras?

Carnival celebrations begin on, or after, Christian Epiphany, known as Three Kings Day, and culminate on Fat Tuesday. The following day begins Lent.

Lent starts on Ash Wednesday, the day after Fat Tuesday and lasts for 40 days, during which time people sacrifice and fast. Rooms fill up fast and early! Book your New Orleans accommodation now!

The origins of Mardi Gras can be traced to Medieval Europe. While the holiday is based on the Christian calendar, the roots are actually believed to be from ancient Pagan fertility rituals that were held on February 15th. During the spread of Christianity, Christians decided to adopt the ritual and include it, thus making Christianity more comfortable and familiar to convert to.

On March 2, 1699, a French-Canadian explorer, Jean Baptiste Le Moyne Sieur de Bienville hit land with his men, 60 miles south of what is now New Orleans, and named it “Pointe du Mardi Gras”, realizing they had arrived during the holiday.

However, Mardi Gras in the United States was not celebrated until 1703. The first US location to hold Mardi Gras festivities was a small Southern town, later to become Mobile, Alabama, that was also settled by Bienville and his men. According to the official Mardi Gras New Orleans website, the first Mardi Gras occurred with a secret society, the Masque de Mobile, formed to organize the celebrations.

It was not until 1730 that Mardi Gras was celebrated in New Orleans, which was also founded by Bienville (1718). Early on in New Orleans history, elite society balls took place during Mardi Gras, organized by the Governor, but parades did not come about until closer to the late 1830’s.

Krewes began to form amongst elite groups of society people in New Orleans in the early 1870’s. A Krewe is a private social organization that puts on a parade or ball for the Carnival season. They generally have a name that signifies a unique aspect of the group or something historic that they represent.

Each Mardi Gras Parade Krewe has a unique history and theme. Some have been around for decades, while others have been in existence for just a few years. In addition to partaking in and planning Mardi Gras festivities, many Krewes  have a philanthropic component and focus their fundraising efforts on a meaningful community cause.

The first Krewe in New Orleans was the Mistick Krewe of Comus, formed in 1856. The Krewe of Rex is another of the oldest New Orleans Krewes. They were first established in 1872 by a group of the city’s businessmen to entertain the visiting Russian Grand Duke Alexis Romanoff. They incorporated Romanoff’s family colors of purple, green and gold as their Carnival’s official colors. Purple stands for justice; gold for power; and green for faith. These remain the official colors of Mardi Gras.

While the Grand Duke was visiting, “If Ever I Cease to Love,” was adopted as the New Orleans Mardi Gras anthem, due in part to the Duke’s fondness for it. Each year, a member of Rex is selected to be “Rex”, or “King Rex”, the monarch of the Krewe for the year. Rex is always an influential resident who is involved in community improvement and philanthropic efforts. His identity is kept secret until the day before Fat Tuesday. Traditionally, the mayor hands Rex a symbolic key to the city. Also, the popular collectible doubloon coins were introduced by Rex in 1960.

While the term “Krewe” is best known in conjunction with Mardi Gras in New Orleans, Krewes also participate in Carnival festivities in other locations. Most Mardi Gras Krewes in New Orleans developed from private social clubs with restrictive membership policies, and are completely funded by their members, through fundraising, corporate sponsors, member dues, and Krewe merchandise sales. Therefore, public festivities and parades are always free. The city of New Orleans is not involved in coordinating Mardi Gras parades, except to issue parade permits.

There are many traditions that follow Mardi Gras in New Orleans, such as colorful and elaborate floats, masks, galas, throwing beads, doubloon coins, and the king cake (my personal favorite). Many people dress up for Mardi Gras. Wear this super cool Mardi Gras poncho or this Mardi Gras costume to stand out whether you go to Nola or have your own party.

Many Krewes in New Orleans have a theme to their parade each year, and their floats generally reflect those themes. Mardi Gras floats are costly and often take a Krewe the entire year to design and build. A great deal of thought, effort and artistry goes into each float. Often the floats are protected in secret work dens around the city, in order to do their big reveal to the public during the parades. Many of the floats light up, and have moving parts, some even utilize fiber optics. Floats are a huge part of the parades and have been in New Orleans for over a century. Most New Orleans Mardi Gras parades have a minimum of 25 to 40 full size floats that can accommodate an entire Krewe and their guests.

Creative and fancy face coverings are an integral part of Mardi Gras and have been for centuries. Masks were originally worn during Mardi Gras to allow people to escape their social class constraints. While wearing a mask, people have the freedom to be whomever they want, and to mingle with whomever they desire. Masks today are fun and are associated with part of the glitter and mystique that is Carnival. Order your Mardi Gras masks early to be sure you receive them in time!

Most New Orleans Mardi Gras balls are formal, private, and by invitation only. They are usually put on by the individual Krewes. Each year a King and Queen for the Krewe is chosen and their identities are kept secret until the big event. Some of the balls are opportunities to introduce young New Orleans debutantes to society. According to the official Mardi Gras New Orleans site, “Ball invitations were originally die-cut and printed in Paris.   Even today they can be quite colorful and valuable works of art. Invitations can also be collectors’ items framed for their beauty and considered interesting conversation pieces.”

The tradition of float riders throwing trinkets to the crowds began in New Orleans in the 1870s, but the practice was inspired by Renaissance festivals that took place before Lent, where revelers would toss things into the air in celebration of the coming fast. Typical “throws” these days include beads, cups, coins and stuffed animals. I have received everything from whoopie pies to hats to sunglasses, though.

You can buy Mardi Gras Beads here. Always buy more than you think you will need as you want to wear minimally one of each color and have plenty to give away.

As a side note, women flashing their breasts for beads began in the 1970s, and was never, nor is, part of the authentic Mardi Gras celebrations. These acts mostly take place in the small area of the French Quarter where there are many tourists, strip clubs, and people who are intoxicated. Most official parades do not go to this area due to the large float sizes and small streets.

Mardi Gras doubloons are normally aluminum, but can be made of precious metals. Doubloons are shaped like coins and usually have a design or emblem on the back and front. Some are in the traditional Mardi Gras colors of purple, gold, and green, while others are silver. Many people like to collect them as they often are imprinted with various Krewes. They can also be dated for the Mardi Gras year. Some doubloon coins are designed by artists and made of more expensive metals such as silver. These doubloons have value beyond collecting them for memories.

Looking for some Mardi Gras Coins for your party or to share in Nola? They are available here!

King cake season begins in New Orleans the first week of January. King cake is one of the traditional and most famous food items leading up to the Mardi Gras celebrations. Traditional King cake is a cinnamon coffee cake. King cakes have also become popular with filling flavors such as cheese, apple, chocolate, praline, lemon, and more.

Hidden in each oblong of braided coffee cake dough is a plastic baby. After the cake is served, someone will call out, “I got the baby!”, indicating their slice contained it. That lucky person is King or Queen of the party. Tradition says that whoever finds it must host the next King cake party too. Hundreds of King cake parties are held leading up to Mardi Gras each year. Not only are they popular amongst family and friends, but also in offices too. Any reason to throw the next celebration. It is Mardi Gras after all; Let them eat King cake!

You can buy a ready to eat King cake here or a King cake mix to make yourself.

Attending Mardi Gras in New Orleans for the first time is an amazing and unimaginable experience. Radical costumes, bold colors, glitter, blaring music hats, and delectable food are juxtaposed against larger than life floats, decked out in lights, carrying fun loving New Orleanians, tossing beads and treats for anyone ready to catch them.

The sounds of horns blare perfectly from the dimly lit bars, spilling out in echos over the crowded streets. A strange combination of Beads and trinkets, masks and whoopie pies and colors come at you from every direction.  The mood is light and happy and loud, yet peaceful. My experience of Mardi Gras is celebratory, joyous and generous.

The fun and excited energy is palpable in the air. Many are drunk on gourmet food and the high of the nonstop parade. Some are boozy and others just exhausted. But whatever it is and whoever you are, it’s okay because you are welcome. Everyone is welcome to the greatest free show on earth.

In addition to attending parades, do not miss the live music, delicious food, generous hospitality, and just wandering the streets, taking in the history, decorations, and passion and love New Orleans citizens hold for the traditions, Mardi Gras, and their city.

To this day, Fat Tuesday remains a legal holiday in New Orleans, thanks to Governor Warmoth, who signed the “Mardi Gras Act” in 1875. Welcome to Mardi Gras: Let them eat King cake and then some!

In addition to celebrating Mardi Gras in New Orleans, many other cities also hold popular celebrations. Some of the most famous outside of New Orleans are Mobile Alabama, Rio De Janeiro Brazil, Binche Belgium, Nice France, Venice Italy, Curacao, and Trinidad.

Don’t miss Jenny In Wanderland article The Tradition of Cascarones! 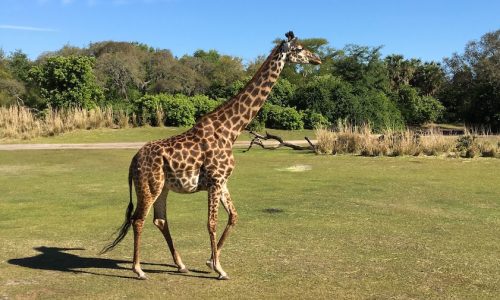 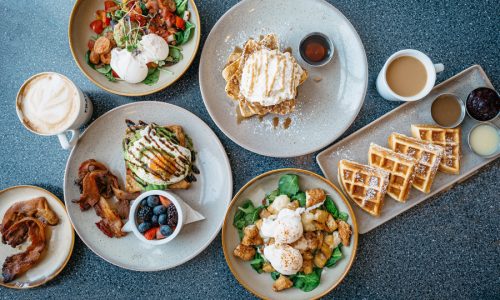 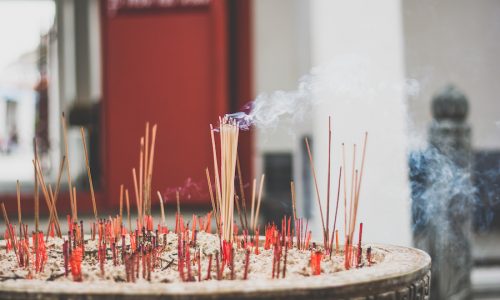